Bunting yourself out of an inning

Heard about this particular incident in a recent high school game, but it's not the first time I've seen or heard something like this. First let me set the stage, then I'll comment.

Top of the sixth inning. Visiting team is down by one run. Leadoff hitter for the inning gets to first base on a hit. Next better up (who is the team's home run leader) bunts her to second. Hitter after that bunts her to third. You now have a runner on third and two outs. Fourth batter of the inning flies out to CF. Inning over, no runs scored. Coach is mad at the girl who hit the ball to center field for not getting a safe hit. Visiting team goes on to lose by -- you guessed it -- one run.

Strategically, bunting twice to put the runner on third makes little sense. First of all, you have nobody out and a long ball hitter at the plate. I don't know her recent history so maybe she's been struggling, but still: why give her up (along with an out)? Let her swing the bat and maybe something good will happen. Maybe try a hit and run, or even a fake bunt/slap. Whatever.

Where it really falls down, though, is giving up that second out to move the runner to third. Now you're asking for a lot from that last hitter. If you still had an out to play with you'd have more options. That long fly ball to center with one out might score the runner from second (it's a big field). If the previous hitter got a hit and advanced the runner to third, the run would definitely score and you're on your way to a big inning.

When it comes to decisions like that, you really need to take emotion or comfort out of it. Even if your team can't hit water if they fall out of a boat, you need to give them their best chance to score. Taking the bats out of their hands and simultaneously decreasing your odds of scoring isn't the way to go. Know the situation, and act accordingly.

What is the percentage of scoring a runner from 2nd with one out? Nothing wrong with bunting, but I am not sure the real reason to bunt from 2nd to 3rd for you second out. You need a hit to score either way. 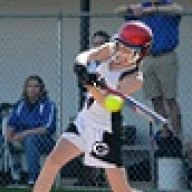 Bill Bollinger said:
What is the percentage of scoring a runner from 2nd with one out? Nothing wrong with bunting, but I am not sure the real reason to bunt from 2nd to 3rd for you second out. You need a hit to score either way.

Now take a look at what bunting the runner to third with one out does. You have a 32% chance of scoring from third with two outs. You also only have one shot at it, and as Bill says you still need a hit. You also need a hitter who handles that type of pressure well.