I just posted on my blog a post about how the economy is affecting our sport.

I was wondering if the bad economy is affecting you softball wise or your program?

Did you cut back on equipment purchases or private instruction?

Does your team travel less or doesn't participate in as many tournaments? 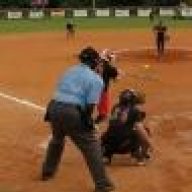 Our youth sports program has noticed a drop in enrollment in softball and baseball. It's not a large number of kids, but we're a small community and had reached the point in the last few years where we were fielding about 2 teams per age group. This year there were only 18 girls who registered for 12U, so we'll only have one team in that age group this year. That does put us in better shape to be able to compete with the other communities in our league as our limited talent pool won't be split into 2 teams.

A co-worker of mine lives in Dothan and he told me during basketball season that their enrollment was down considerably. They had to have fewer age groups in order to have enough teams for their schedule. He said baseball enrollment there was down as well. I believe he said 3 fewer teams in the age group his sons are in.
S

Albany NY - our rec program is down from 454 to 431 - so not bad. and we actually had an abundance of sponsors this season as compared to years past.
N