Westwind said:
No- that wasn’t what I meant at all. Didn’t mean the jewelry thing.

What I meant was when I watch softball at better tournaments with better umpires there comes a point in the weekend when I notice that I “haven’t noticed“ the umpires at all. That’s a good thing.

Locally it seems like the umps insert themselves into the game and try to become the center of attention. The jewelry thing is an “opportunity” to stop play, wave their arms, yell to the coach that there is a player wearing jewelry, warn the player, warn the coach, chastise the parents, send an email to the tournament director and create a press release. I think it’s because the same umps are dealing with the same coaches players and parents every weekend and they are all holding grudges, settling scores and get away with saying things like “you know I don‘t like that rule“, “I call strikes where the batter is not at the plate“, “I won’t call strikes above the belly button“, etc etc.

I will say that I am glad that in the summer at the bigger tournaments they allow these kids to show a little personality. These players spend all summer traveling all over and it’s a really small way that they can have some control over their lives, control over their appearance, maybe feel unique/prettier or something. Not sure how to explain it but I know it is important to the players and I’m pretty sure it doesn’t hurt anything. Talking about 16’s and up where issues like that become more important.

Again, talking about kids who are spending every weekend of the summer 4 plus hours from home missing all the stuff that teenagers do with their friends.
Click to expand...

Exactly when I umped it was simple if you didn't notice during warm ups, which I usually tried to do, as they get to the box, hey you forgot about your earings, to which the girl would say oh I'm so sorry run back to dugout and hand them to coach and 15 seconds later it's "play ball". 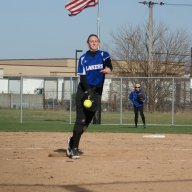 Westwind said:
No- that wasn’t what I meant at all. Didn’t mean the jewelry thing.

What I meant was when I watch softball at better tournaments with better umpires there comes a point in the weekend when I notice that I “haven’t noticed“ the umpires at all. That’s a good thing.
Click to expand...

Maybe. And I’m just spitballing here. Maybe at the better tournies with better umps you have better teams with better coaches. So the umps don’t have to enforce these rules that everyone in the park knows.
If a player is wearing earrings the ump is the last person to know. The player knows, the parents know, her coach knows... why is it left to the ump to enforce?

It is also possible our definition of a "big tournament" differs.

DD played 3 years of 16's and her and her teammates all wore jewelry all summer long. She is playing her first summer 18's. Still the same and most 18's will be able to wear jewelry this fall in college. So who cares.

It isn't enforced.... because it isn't important in any way and it doesn't need to be enforced at least at older ages.

Good umpires don't get noticed because they are in the right positions, they make decent calls and they blend into the game. If they did see jewelry that is excessive, most of them quietly talk to the player. "Too much, kid. Take it off and throw it in your bag when you get back to dugout." Have seen that happen. Again, no one has to notice it.

Inexperienced umpires call attention to themselves... partly by screwing up. By being out of position so thy cant see the calls they are supposed to make. And by trying too hard to prove they know what they are doing. "TIME!!!! COACH I HAVE SPOTTED JEWELRY! STOP EVERYTHING WHILE I MAKE EVERYBODY HERE AWARE THAT I AM THE MOST IMPORTANT PERSON HERE! COACH, YOU HAVE BEEN WARNED! THE PLAYER HAS BEEN WARNED. WHO ARE THIS PLAYERS PARENTS? YOU ARE WARNED TOO." It is really noticeable to me. It looks insecure to me.
Last edited: Jun 19, 2020

Always thought it was funny
when an umpire told me had to remove the little thin gold tiny hoops from my ear
( not dangling, very small)
And yet
EVERYONE HAS RAZORS ON OUR FEET
oh i mean STEAL CLEATS ! 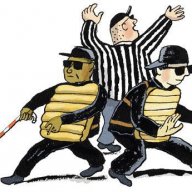 Westwind said:
Inexperienced umpires call attention to themselves... partly by screwing up.
Click to expand...

This is 99% of the reason. Inexperience & lack of training and being told by someone that it is 'important'. How to handle yourself as an umpire is rarely - if ever - taught at umpire clinics primarily because umpire training is almost non-existent for the most part so when it does happen, there is so much more to cover.

"TIME!!!! COACH I HAVE SPOTTED JEWELRY! STOP EVERYTHING WHILE I MAKE EVERYBODY HERE AWARE THAT I AM THE MOST IMPORTANT PERSON HERE! COACH, YOU HAVE BEEN WARNED! THE PLAYER HAS BEEN WARNED. WHO ARE THIS PLAYERS PARENTS? YOU ARE WARNED TOO." It is really noticeable to me. It looks insecure to me.
Click to expand...

This on the other hand- 99% of the time this is BS. While there are a few 'power trip' umpires out there - they are actually extremely rare.

It is almost always not having the experience or the right mindset or just not knowing how to handle the situation. It doesn't help that the rulebooks are often written this way; they will say something like "PENALTY: player and coach receive a warning; second offense ejection" but there are no guidelines on how to give a warning or execute an ejection is needed. Calling attention to yourself is not the goal even if it happens.

And yes, of course, it looks insecure; that is what inexperience or bad training or both looks like. They are trying to cover for being uncertain by being over-aggressive or defensive.

My DD came out to umpire her first games this weekend with me (which was fun for us both). The night before we went over positioning, how to move on the field, signals, timing, etc. Spent about an hour teaching and answering questions. Did some fieldwork before the first game. That hour of one-on-one and fieldwork is more than 95% of umpires get before they go on the field; most get maybe a group clinic of about an hour and then are let loose. It is pretty much all on-the-job training.

No one wants to properly invest in umpires and umpiring; it is a simple fact. Add in that there just isn't enough umpires and yeah, quality is often going to be questionable.

For example; as I have said on this site before, PGF has taken over the high end of softball in Florida over the past 2 years and part of that was because they were getting more of the good umpires available by paying more and could offer better games to call; and that helped them be able to selectively use really good umpires. Fast forward to today - taking over has meant the PGF tournaments are getting much larger; which means more games; which means they need more umpires. That has meant some of the fringe guys they didn't need before are getting games.

Now if there is a PGF tourney on, and they have a large set of good umpires; well there is also an even larger USSSA tournament (perhaps 2) happening the same weekend, plus a NSA tournament, and a FastPitchOrlando tournament. Now every tournament will get a few of the good refs who are local, like working a particular sanction, works better around their life or just like the director better; and also because a few extra bucks and better games are not enough to make most people want to drive several hours and share a room in the cheapest hotel in an area with another umpire.

But you can quickly see how your 12U-B game may not always be getting the cream of the crop.

I get a kick out of going “full on snarky” some days and whenever I wrote that I was on a roll.

My 18u team played local the last couple weekends. Had a much better draw umpire wise this weekend. Had a plate ump tell a current college player take off some chintzy little bracelet and stick it in her pocket during an at bat. He did it so “low key” that I bet I was one of the few people that noticed. I like that. Of course it’s dumb that the entire other team was wearing heavy duty football wrist bands on the same wrist and that’s ok. He also didn’t make her take out her nose ring. (BTW, this kid, nose ring or not, is an absolute delight to be around and coach.)

Still had the clown that fussed about everyone’s chinstrap. Way to go. Safety first and all.