WHAT POSITION TO PLAY, Who Decides?

Kidding, not kidding. For some girls, it's definitely the parent deciding. When I coached our travel team, I'd ask the parents where their DD wanted to play and liked to play. Then separately asked the girls. Almost half the families had different answers.

... and when the coach realizes that little Sally can't pitch, even though the parents think she can? Little Sally finds herself on a new team where she pitches.

But I realize that's just a few families, certainly not all.

riseball said:
At her age I would encourage her to learn multiple positions. In order to play first base you need to have one of the very best bats on the team and typically the inability to play another position better than someone else. Unlike some positions you are not going to get the slot in the order based on your glove and a .250 batting average. Coaches fill their lineups with hitters and then put them in positions. Most college players end up playing somewhere else other than what they played in TB.
Click to expand...

I've tried to tell some coaches and parents this and they just don't believe me.

Of course I phrase it more like "First base is one of the easiest positions to play. You basically stand there and catch the ball."

Talent gets picked at tryouts!

Talented players get to pick what team and position.

Thats why teams have starters who earn the position! 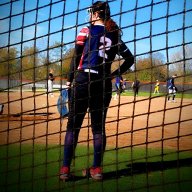 I guess the best way from my perspective as a coach is to evaluate the talent pool on your team. If it's a brand new team it's open competition all spots are up for grabs. Spots are earned talent and athletes rise to the top then role players fill out the rest of the team. Then the rest of responsibilities fall on coaches shoulders to lead and coach them up and give them the tools to succeed. If your team is established players come and go and we fall into a if it isnt broke don't fix it attitude. But can't not take girls because the team is doing well. There is a diamond in the ruff out there that might not have been a good fit on their previous team and could be the kid you have been looking for to make your team better.
L

So, I'm coaching the 7-8th grade school team a few years ago. taking grounders indoors. basically I'm hitting balls to all the position players at about SS. All girls that said they play 1B are rotating thru at 1B. It is not a close throw. at least SS to 1B distance.

My DD, other coach's DD and couple others, can bring it pretty good prolly 50-55MPH, across the diamond.

We get done with drill, take a break for water. One of the mom's comes over and ask us coaches to have above named girls throw slower to her DD playing on 1B. I think the blank stare she received was the most polite answer she was gonna get. Needless to say, they continued to throw normal and the other girl was not on 1B from then on.

Sometimes who plays where, just naturally sorts itself out.
T

The Coach puts the best players in the positions that will most help the team win. The players ultimately decide on what position they want to play by being the best at that position and continuing to practice hard, and play hard to keep their spot.

I hate the idea that someone leaves a team based solely on their daughters inability to play where she wants.

1. Your #1 goal is to be in the top 9 regardless of where you play on defense. Get in the game. You achieve that by being great on offense.
2. If you want to play a specific position, keep getting better and earn it. When you earn, keep getting better so you don't lose it.
3. If you haven't earned it yet, keep working hard, keep fighting for it. Don't give up.

When the coach approaches you after tryout and offers your DD a spot on the team. Speak up and ask "where do you see her fitting in on this team? What positions will she play and where do you see her in the batting order?"
You will probably catch him off guard but thats what you want. The truth. Dont join a team and then complain, "we would have joined this team if I knew blah blah blah"

Dont accept position on a team the HC's dd is the SS and the AC's dd is 2nd base and bat 1 and 2 in the batting order.

Spend most time on hitting.

I had a girl try out for our team. 12u and she was almost 6ft tall, bigger girl. She told me that she had only played outfield before. I asked her to take some balls at first to try it out. 1 season later she is full splits at 1st and is overall a wall over there.
So sometimes a coach can see where a girl might need to be (ie left handed 2nd basemen are bad ideas) and make moves to improve girls even if that's not their dream spot.

Hawk_ said:
I had a girl try out for our team. 12u and she was almost 6ft tall, bigger girl. She told me that she had only played outfield before. I asked her to take some balls at first to try it out. 1 season later she is full splits at 1st and is overall a wall over there.
So sometimes a coach can see where a girl might need to be (ie left handed 2nd basemen are bad ideas) and make moves to improve girls even if that's not their dream spot.
Click to expand...

This is a good story of a young developing player. I like you asked her ....not told her!!!!!
Nice to hear communication with a new player! To hear her response only got to play outfield suggests she did not come from a situation that offered more than one option. Obviously a taller player is a good posible choice for 1st base. Sounds like you offered her opportunity to try! Nice!


Think as players get older tend to know what position they like to play and skills get defined for each. As well some younger kids mentally understand sooner and find what like too!
T

Hawk_ said:
I had a girl try out for our team. 12u and she was almost 6ft tall, bigger girl. She told me that she had only played outfield before. I asked her to take some balls at first to try it out. 1 season later she is full splits at 1st and is overall a wall over there.
So sometimes a coach can see where a girl might need to be (ie left handed 2nd basemen are bad ideas) and make moves to improve girls even if that's not their dream spot.
Click to expand...

We actually had the exact opposite scenario. During our tryouts, we do 2 things:

1. We run drills at several areas and make ALL girls go through them.
2. We ask what position(s) they LOVE to play, and what positions they can play if asked. (we love versatility).

This girl came to us as a 1B, but during our drills, she was one of the best OF I had seen (12u). Her footwork and glove work was great, and her ability to read plays was next level. Plus, she had a pretty decent arm. We offered her a spot and now she OWNS the OF on our team. She has bought into the role, and loves it. She is somewhere around 10-11 in terms of hitting (out of 12 girls), but I would be a poor Coach to not get her in the lineup anyway possible (and that is often Flex). She never sits.