I just found this forum. It's just what I've been looking for! Plan to see me here frequently. Anyway, here's the deal. A coach in our high school conference does something that to me is very unsportsmanlike. I want your opinions.

When his girls are batting he tells them where our catcher is setting up. He literally, from third base, shouts "outside!", "in, in, in!", etc. Our catcher, my DD, tries to delay her positioning as long as she can, but no matter how long she waits he hollers her location.

Maybe it's me, but jeez louise that fries my hiney!! In all of the games I've attended throughout the years as either a parent or a coach I have NEVER seen any other coach do that.

So, I "spoke" to him after one of our games. I told him that I lost all respect I had ever had for him. The next time we played his team I hoped it would cease. However, much to my chagrin, not only was the coach calling the location the ENTIRE DUGOUT got into the act! It's one thing to be a baffoon and demonstrate poor sportsmanship, it's another thing all together to pass that on to your players.

I hoped the umps would put a stop to it, but they did nothing.

Okay, I obviously REALLY want your support telling me how right I am and what a poor sport the coach is, BUT if you don't agree I guess I'll read those too.

This doesn't happen in baseball BECAUSE of the threat of being hit by a pitch. Hmm!

On other boards, we discuss this frequently. A little different topic is when the coach feels that the batter is peeking at the glove location.

I always write that we can see the glove location and we can certainly see a shift in the catcher's position. The batter is standing right there. We don't need anyone to tell us where the catcher is sat up.

So, I bet this coach is just as annoying to his batters as he is to you.

You could cross him up every pitch by having your catcher get set up down the middle and instruct the pitcher to throw at the catcher's knee caps.

You are right. The buffoon should shut up. Your challenge is not to become a buffoon, just because he is.

Like have your girls chant "Inside, outside, upside down. We've got the good coach, yours is a clown."

Just make certain that you bunt him, run on him and beat his team by the run rule.
M

It's not a big deal because it's easy to use to your advantage. It IS bush but so what. Move the catcher outside till they have done their yelling, then quickly slip back inside for a strike on the inside black belt high. A few repetitions with variations will have this coach's own players very annoyed with him. Newbie gung ho coaches. They usually learn.

Just one more Daddy trying to find an edge...

At college, my DD was taught to focus on the shoulders or kneecaps of the catcher rather than on the mitt. The catcher then has to indicate the location with an additional signal or two. No big deal, really.

One opposing coach had taught his 3B to try to pick up signs from me. This was 12U, so the signs weren't real complicated. She figured them out. I told her and her coach that she could get hurt doing that, but they laughed it off. So, the next inning, I changed the indicator, gave a sign for a bunt with the old indicator, then gave the sign for a mandatory swing with the new indicator. Of course, she went charging to the plate like a racehorse, only to have the batter take a home run swing.

In retrospect, I should have simply changed the indicator each inning. There was a chance the 3B would have been hurt. 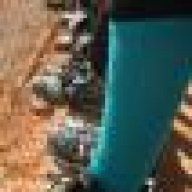 Cases of Spygate in Girls' Softball is worse than The Associated Press reporting that Bill Belichick acknowledged that he violated NFL rules prohibiting filming opponents' signals, but insisted there was no intent to hide what he was doing!

Hate to tell you, but it is a fact of life. Literally every team does it in some way or another, they just arent as obvious about it as yelling outsided or inside. Runner at 2nd base, right hand in air, inside pitch, left hand in air, outside pitch. My daughters high school team and club team both yell go to it on outside pitches, or turn on it for inside pitches.

If you think the team is getting an advantage, your catcher is just going to have to wait until the last possible second to make her set. Literally after the pitcher has started her windup.

This coach apparently missed the lesson on "It's not polite to stare." If the defense is putting it out there, it is natural to grab for the taking. The hiney fry comes as a result of the obviousness...

Ed, during the natural stresses of life over the last couple of days, I want you to know your post has brought a smile to my face. It is amazing how a little bit of humor takes the sting out

You know, after writing about this issue I actually feel better about it. There are a lot of things in life to get worked up about, this really needn't be one of them. We'll likely be playing them again this weekend in a tourney so I'll have to work my newfound zen attitude and not let it get to me.

Coaches who focus on such small details typically forget to coach the important stuff. Did his players actually know what to do with an outside or inside pitch?

Ill tell you what I find unsportsmanlike in softball - pitchers who grunt or yell after they have released a pitch - timing their noise to distract the hitter. I've asked umpires what they would do if my hitter yelled at the pitcher as she was striding toward the plate - they all have the same response: "I don't know - I never thought of that." This is something that should be outlawed - it's ugly and there is no need for it.
You must log in or register to reply here.
Share:
Facebook Twitter Reddit Pinterest Tumblr WhatsApp Email Link