It can all be taken in an instant. 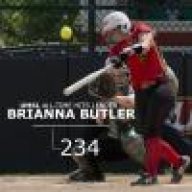 I have coached for a very long time. When you do that, you often coach siblings and sometimes over extended periods of time. I did so with one family of baseball sons. All of the older brothers continually talked about the youngest one. He was going to be so good and then he was. We had prom and he was dating an older girl. So, he took her to prom after just getting his license. He was everything the brothers had said he would be and then some and was so energetic and full of life. He had a great future. Coming home from prom, he and his girlfriend were killed by a drunk driver. I spoke at his funeral because the brothers all asked me to. Giving that memorial was one of the hardest things I have ever done.

While coaching basketball, we had this young lady who had that spirit. She had that "it" that made everyone want to be around her. BB was very small then and so, when this young lady would get a break, she would sit down on the sideline and color BB's coloring book with her. This young lady was on every committee, service group, ... our school had and was on the homecoming staff to dress up the gym. She made a run to get some stuff for homecoming and was driving the back roads to her home. They had just oiled and rocked one of those roads. She was driving too fast and hit a tree. Her mom and dad asked me to speak at her funeral. Years later, I had her brother in class and he gave me a letter from their family. I can't read that letter. It tears me up too much. When we built our new house, we were cleaning out our old house and I was throwing stuff away. I put a coloring book in the trash not knowing what I was doing. BB started yelling and crying. She grabbed it and showed me a page. "For BB, Love Erin." Needless to say, that coloring book is in a special place now and I have a picture of Erin up in my room.

I feel so badly for obbay. I can't hardly look at that thread knowing the above and those families of the players I've spoken at funerals for. Cherish every moment. I sometimes sit on a field and just look out at it. This morning during our hitting camp, one of the players asked me what I was smiling about. I told her I was just thinking of my life and ball. With that life also comes some heartache. Hug your kids! I tell BB pretty much once a week to be careful. I only get one child.
Last edited: Jun 25, 2018
P

Cannonball said:
I tell BB pretty much once a week to be careful. I only get one child.
Click to expand...