pattar said:
If you are playing in temps that are cold enough that it can cause problems for a bat then I would be more worried about injuries to players..that said a BP is always a good idea. If you want to use it in cold weather knock yourself out.
Click to expand...

I was going to ask….what does temp need to be around for damage to potentially start occurring? 40’s? 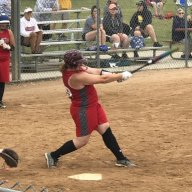 Anderson Rocketech (Alloy) is a great option- ND here, and we have played games in 30’ temps in the spring and the bats perform very well.
I think the temps are all where your girls are from and used to. My DD wilts in 100+ temps, but pitches in short sleeves when it’s 35 and snowing lol
P

HunterMO said:
I was going to ask….what does temp need to be around for damage to potentially start occurring? 40’s?
Click to expand...

Manufacturers say 50 I think? I would say that might be fairly conservative.

Have never felt it was worth it to mess around with a cold weather bat.

Always just had a back up of same make and model.

The one time we tried to have a practice bat she destroyed it in my heated shed hitting balls that never saw cold temps.

Our old hs coach was a famous bat destroyer. His cage was in a converted and unheated chicken coop. Well….. unheated isn’t correct. It was unheated for the first half of the first lesson he gave every night because he would flip the heat on when he turned on the lights. He charged top dollar but used frozen dimple balls he apparently found in ditch next to a ball field. They were flung randomly out of a Jugs machine with a groove worn in the wheel. He reaped many a bat. The one I laughed at the most was the boat paddle shaped Rocketech that his star player carried around for years for some unknown reason.

I took my very young kids to him a couple times before I knew better. He got mad at them because they were fighting back tears because the rock balls were stinging their hands. I had no idea what was going on at the time but I figured it out later.

Westwind said:
Excellent bat. Some people online called them “Killer B’s”, there were several models that ended in B and they were pretty much all good.

Local girl went to a mid major in early 2010’s who probably could have played anywhere she wanted. Was a “for real” bomb dropper. She broke a shopping cart full of the Stealths including the Stealth Speeds. I worked with her mom, she was always on the hunt for them and they were starting to get hard to find towards the end of her hs career.

I bought the black with purple letter version of that bat a few years ago for dd. It was a good bat- she trashed it out in one winter though.

Make sure your daughter knows she can’t swing that bat in games.
Click to expand...

Is this bat no longer approved? She loves her Meta and I'm sure she wont steer away from wanting to use it. Just wondering
K

That is good. She has a Mantra and a Meta. Does good with both but I feel she has more power with the Mantra. She prefers the Meta for balance and weight (it is 1 oz lighter on the scale) maybe this will make her want to use the Mantra lol.
B

Any cheap bat with a warranty is a great bat.

I pick up a new 'last years model' Rawlings Quatros for $130 to $150 every season. DD uses them for everything but 'perfect weather games'. BP, cold weather games, you name it.

Not the best performing, but far from terrible. They still get the job done and last a long time. They do actually perform better the more you use them. I'm talking 2000 swings and she's good to go.

kbailey45us said:
Is this bat no longer approved? She loves her Meta and I'm sure she wont steer away from wanting to use it. Just wondering
Click to expand...

I didn’t think so! I didn’t see it on the list though- you should be ok in everything except USSSA.
B

Random comment,... what a strange place to find this information. Lol.