For all those pitchers who aren't strikeout queens

The popular view of pitching in our sport is that it's critical to have a dominant pitcher -- one who can strike out 10-15 hitters per game, every game.

While I agree that it certainly helps cover up other ills, and often makes coaches look better than they really are, not every pitcher is capable of such singular heroics. But the truth is, they don't have to be. A pitcher's job isn't to strike everybody out. It's to prevent the other team from hitting the ball well, so your fielders can help get the outs. Strikeouts are merely a bonus.

Don't believe me? I just saw the stats on the Gold Medal game. Cat Osterman had nine strikeouts in five innings of work, while Monica Abbott had four in two innings. That's a total of 13 strikeouts. In the seven innings she pitched, Yukiko Ueno for Team Japan had four strikeouts total. Her team won 3-1.

Mike Candrea is always saying that softball is an individual sport played in a team setting. That team part is the part a lot of people forget about. If you can play strong defense and scratch out a few runs you can win a lot of ballgames even if your pitcher isn't throwing bullets by batters. Setting up hitters by changing speeds and moving the ball around can keep them off-balance enough to induce weak ground balls and simple pop-ups that turn into outs.

To a lot of people, a perfect inning for a pitcher is nine pitches, all strikes. To me, it's three pitches/three outs. If you can do that you won't have great personal stats. But you'll take the heart out of the other team and rack up the most important stat -- a lot of Ws.

So take heart all you undersized or less than gifted pitchers. You can still be effective. You just need to do your part and help the team. After all, they don't hand out trophies for strikeouts. 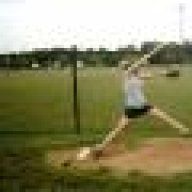 great post... i've seen a lot of pitchers with great defenses behind them wear themselves out by trying to strike out every batter. i've seen a lot of these "strikeout" pitchers wear down in late innings because of fatigue and number of pitches thrown. you figure on average you're going to throw at least four, most likely five, pitches to every batter. that's 100+ pitches in a perfect game where all 21 batters bite the dust by striking out. since these games are rare and there is a walk or two, the batters that foul off 6 and then a couple of hits, it can make for a long game.

i noticed this scenario several years ago when other parents started saying they wished they'd put my dd in so they would get the game over with. my dd probably only averages 4 to six strikeouts a game but rarely walks a batter and didn't give up a single homerun this entire summer against some really good hitting teams. she keeps the balls on the ground and gives batters something to hit. she did have a four pitch inning this summer.