Are We Destroying Our Kids? 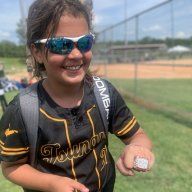 My daughter has Ehlers Danlos Syndrome - a genetic disorder that affects joints and evidently can enlarge the aorta - but hers is very minor. She is only 9 and wanted to start pitching and I never would allow her to, due to fear of wearing out her shoulder. So as soon as some pandemic restrictions were lifted, she had thorough evaluation by the good doctors at Marshall University Sports Medicine group and also their Pediatric Cardiology unit. She was given an all clear on all account - Dr. Hendricks at MU said, "we don't know what she can't do until she can't do it" and then warned us that her shoulder pain will likely mean more than most other girls shoulder pain. So I try to monitor her closely, though she has not started pitching just yet - next month she will begin lessons. I worry about over use simply because of the disorder. Trying to get time off and still be in an organization is tough, and we are not in a "big-time" organization, but one we do like as it has good people running it. We have one last tournament in 10 days and then it will hopefully be practice on Sunday's only and she can rest...if only I could keep her from flipping on the trampoline.
B

I agree with a lot of the above. even have considered making DD unavailable for a weekend or two this fall (very aggresive schedule thsi fall, probably counted on a rainout or two, but only one single game (weeknight) has been cancelled due to weather), but once other C quite, not really an option. team has already played 25 games since early sept, one more full tourney, single one day, and one double header still on schedule (in our parts, SB and BB generally have to shutdown game wise in early Nov due to weather). Dd starts swim practice (supposed to be 3 per week, will more likely be one or two until fall season over) this week.

We are full believers in multiple sports through HS (at least first half). both DDs swim, DD2 is softball player, DD1 is all in on FH, and plays year round, but luckily her position does not require a lot of repetitive motion (GK). DD2 is also playing FH for this year and at least next for school, so they can play together the one year they have in HS together (and this is why DD1 still swims, they made a deal on their own about this).
You must log in or register to reply here.
Share:
Facebook Twitter Reddit Pinterest Tumblr WhatsApp Email Link