We will be running a few 10U softball scrimmages against a few teams from a neighboring city in the next few weeks. What ideas do you guys have that will make it the best use of our time. Thanks in advance.
G

HT - Thanks for posting, but we're going to need some more info. Best use of your time for what? Avoiding COVID? Game format / rules? Warm-ups? Game schedules for multiple teams? Playing time? Lineups / positioning?

If its just scrimmages
Consider starting a few innings
with a runner on base.
Or
1st and 3rd...

Gags said:
HT - Thanks for posting, but we're going to need some more info. Best use of your time for what? Avoiding COVID? Game format / rules? Warm-ups? Game schedules for multiple teams? Playing time? Lineups / positioning?
Click to expand...

Yes on the tri-tips.

I'd play with whatever rules you expect to see in tournaments. We play 10C, so there's no stealing home, no infield fly, no dropped third strike (D3K). This weekend, we scrimmaged a "B" team, which plays by the "full" rules, so we played that way for a day. But these were more organized scrimmages, almost like a weekly travel league - you can do DH's nearly every Sunday if you wanted, just tell them a few weeks ahead of time, and you get matched up against a random team (usually playing at the same level, when possible).

But if you're the organizer ("We have the field for 2 hours Thursday night, want to scrimmage?"), then set it up however you need to. We've just played one long 1.5 or 2 hr game, which is nice when you don't have to worry about the clock. We've also had innings where rather than 3 outs, you just bat the lineup. This lets the girls stay in a position a little longer. IIRC, if we hit 3 outs, we'd pull any runners that were on base, but otherwise just keep batting until we got through the order. Warning - be sure to let your scorekeeper know about this in advance - GameChanger is going to give you some weird stats as a result of ending inning w/o 3 outs.

Most importantly - just talk to the other coach. Maybe as RAD suggested, you both need practice with RISP, so starting with a runner on 2B might not be as crazy as it sounds. (but it's 10U, so that's probably going to happen by the 5th pitch of each inning!). Just be aware of potential mis-matches. I wouldn't leave a dominant pitcher in for more than 2 innings, unless you've already decided you're not going to be scrimmaging that particular team again. OTOH, if you put Wendy Walkfest in the circle, don't let it drag on for more than an inning, maybe two. The other team did come there to play, not stroll around the bases.

Oh - and I'd still get an outside ump. We've had great luck with an older brother doing the umping, but if it doesn't break the budget (especially if you split it with the other team), getting an "official" umpire helps the girls treat things a little more seriously.

Have each team play defense for 6 outs clearing the bases after 3 outs. This way you don't waste time with between inning warmups, each pitcher and defender get at least 2 consecutive innings of work and at least 6 hitters bat before the teams change.
T 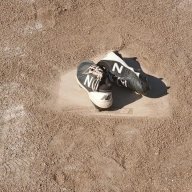 If its just scrimmages
Consider starting a few innings
with a runner on base.
Or
1st and 3rd...

Definitely work on situations. 1st year I coached 8u summer ball I arranged 3 scrimmages, the one before our last tournament I remembered my buddy also had a runner start on 2nd last inning of scrimmages to work on Tie-breaker situations when he coached 14u. We fell apart in the scrimmage. Last tournament in semi-finals we go to a tie-breaker inning and I call the team together to explain it to them, and they go 'oh, that thing we worked on the last scrimmage?' We wound up playing two tie-breaker innings and losing by 1, but we were the only team that scored on that team that weekend.
You must log in or register to reply here.
Share:
Facebook Twitter Reddit Pinterest Tumblr WhatsApp Email Link